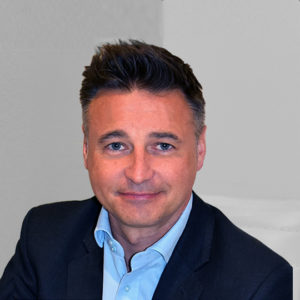 Steven made the decision to invest and join the business in January 2000 with the change of ownership, having spent his previous nine years at McMillan UK Ltd, as the Southern Regional Sales Manager for Audio Visual and Broadcast Systems.

Under Steven’s dynamic leadership, since 2004, Smartcomm has become recognized as one of the leading UK companies in field of Audio Visual and Information Technology solutions. Consistently praised for being well-organized and efficient, the business provides first class service and support in all aspects of its portfolio.

Smartcomm’s turnover has risen consistently year on year, doubling over the last four years alone. As well as excellent sales skills, Steven is known for being a forward thinking, enterprising, energetic and motivational manager who knows how to get the best from his team. He has exceptional organisation skills and this feeds down through the company and to the projects Smartcomm works on, which consistently get awarded top marks.

On a more personal note, Steven loves cars and is a keen cyclist. He has two children and lives in Buckinghamshire.

Any cookies that may not be particularly necessary for the website to function and is used specifically to collect user personal data via analytics, ads, other embedded contents are termed as non-necessary cookies. It is mandatory to procure user consent prior to running these cookies on your website.